Roundabouts cause the most problems for drivers in the Primorska region

After last year’s Mobility Tour, where Slovenia’s biggest insurer wanted to see how drivers measure up on a region-by-region basis with the help of the state-of-the-art DRAJV safe-driving simulator, recently 20 experienced drivers took another test on Koper’s roads accompanied by a driving instructor to verify their driving skills in practice. Just how well did they do?

Traffic regulations in Koper and its surroundings have changed drastically in the last couple of years. Therefore, drivers that do not take these roads on a daily basis and local drivers that passed their driving exam decades ago have quite a few problems with properly understanding and complying with the above mentioned traffic regulations.

This was indirectly shown in last year’s Mobility Tour, which took place in Koper and nine other large Slovenian cities and was also intended for studying Slovenian driving habits. According to the simulator, drivers from the Primorska region placed fifth or right in the middle of the pack in terms of their driving skills. “According to their simulated driving only 35% of drivers would have passed their driving test last autumn. However, drivers from Primorska performed very well in monitoring and correctly reacting to dangerous traffic situations, where their Mobility Tour results were the best of all drivers,” said Aldo Pucer, director of the Koper regional office of Zavarovalnica Triglav.

Most drivers would fail their driving tests
The biggest Slovenian insurance company upgraded its activities in the area of traffic prevention with the Back to the Driving Test campaign. At summer’s end, 20 experienced drivers took another drive on Koper’s roads accompanied by a driving instructor to verify their driving skills in practice. Results showed that only three drivers would have successfully passed their driving test. According to the instructors, drivers had the most problems with roundabouts – correctly choosing lanes and using indicator lights. Driving instructors pointed out not complying with speed limits as the second-most frequent problem. Stop signs were also among the most common issues, as half of the drivers overlooked them.

It should be mentioned that some candidates forced pedestrians to yield, even though they were waiting to cross the roadway directly at the intersections and despite good visibility. While taking the fact that drivers get behind the wheel when they are stressed or otherwise mentally affected, which might have influenced performance on the simulated driving test, this should not be a reason to disobey road traffic regulations or not keep a watchful eye on all traffic participants.

What about the critical points?
Campaign participants had the most problems handling the roundabout at Ljubljanska Cesta. One of the participants didn’t stop for a pedestrian that was undoubtedly trying to cross the road and another participant forced a cyclist to yield. While changing lanes in a roundabout, three drivers did not use an indicator light. Two drivers had problems choosing lanes and they forced another vehicle to yield. Many drivers also had problems with the express road speed limit. Seven drivers, thinking that the speed limit was 110 km/h, drove too fast and would have been punished by speed cameras. Four drivers did exactly the opposite and drove too slowly, considering the roadway state and the traffic flow.

Even though most of the drivers did not pass their repeated test drive in Koper, the final assessment of the driving instructors was encouraging nevertheless. It was focused on the awareness that the moment behind the wheel when a driver makes a mistake is the best opportunity to be warned about that mistake so they can change their driving habits. “Being attentive and self-critical, and knowing that people make mistakes when driving even without realizing them and not intending to make them, is key. Hats off to all the drivers that had enough courage to participate in the campaign,” said Mitja Jeseničnik, a member of the AMZS driving instructor team that is travelling through Slovenian cities as a part of the Back to the Driving Test campaign. 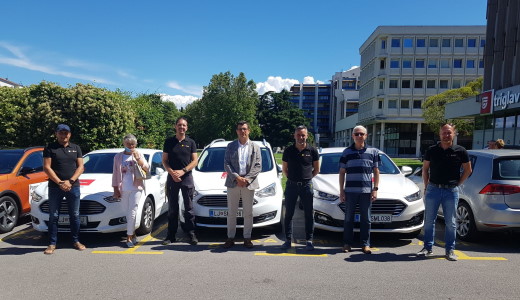