After last year’s Mobility Tour, where Slovenia’s biggest insurance company wanted to see how drivers measure up onaregion-by-region basis using the DRAJV safe-driving simulator, 22 experienced drivers recently took another test on the roads of Celje, accompanied by a driving instructor who verified their driving skills in practice. So just how well did they do?

The driving skills of the residents of Celje were already tested during last year’s Mobility Tour, which was held in ten larger towns and cities to investigate Slovenians’ driving skills. Compared to others, the drivers from Celje did a very good job, taking first place on the simulator out of the ten urban regions competing.

“Driving on a simulator, around half of the drivers from Celje would have passed their driving test last year, which is much better than the Slovenian average. This year the test has been moved from the simulator onto the road. Refreshing the driving skills of experienced drivers contributes to the safety of all road users,” Alenka Novak, director of the Celje regional office of Zavarovalnica Triglav, described the reasons behind the Back to the Driving Test campaign.

Most drivers would not have passed their driving tests
The results of the repeated “driving tests” on the roads of Celje show that only four drivers (i.e. fewer than a third) would have passed the test. According to the driving instructors taking part, drivers had the most problems driving through the railroad crossing at Medlog on Ljubljanska Cesta in the direction of the town centre, where almost half of the drivers didn’t look right or left or slow down when the barrier was raised.

About a fifth of drivers did not correctly enter or exit the motorway, which is especially problematic because of the high motorway speeds. And every third driver had problems with blind spots, which was especially dangerous for cyclists in Celje.

A chance to change driving habits
Although fewer than a third of the drivers in Celje “passed” their repeated driving test, the final assessment of the driving instructors was encouraging. This assessment focused on the awareness that the moment when a driver makes a mistake is also the best opportunity to warn them about that mistake. This gives them the chance to change their driving behaviour immediately.

The driving instructors highlighted the fact that a passed trial driving test is not the only part of the experience: “A formally passed driving test is one thing, but the driver’s ingrained habits, which we’re ultimately trying to change with this campaign, is something else. This refers to whether we’re willing to change and accept new technologies and new traffic challenges. In Celje, driving through a railway crossing, where safety always needs to observed, really stood out. Even if the barrier is raised, you always need to check if the crossing is free. The barrier could be raised because of a power outage or a mechanical failure. At level crossings you are the only one who can take care of your safety,” said Manuel Pungertnik, head of the AMZS driving instructor team that is travelling around Slovenian towns and cities as a part of the Back to the Driving Test campaign. 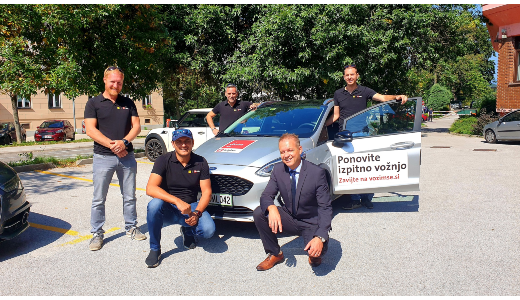