The Children of Triglav campaign builds a new playground in Hrastnik

With modern playground equipment, children can play safely and at the same time develop motor skills and strengthen their physical and mental health. With its Children of Triglav campaign, Zavarovalnica Triglav, together with the Municipality of Hrastnik, enabled the setting up of a new children’s playground as part of Slovenia’s largest insurer’s decade-long social responsibility project.

Playgrounds filled with children’s laughter simply need slides and swings! The new playground in the Municipality of Hrastnik brought particular joy to families with mobility-impaired children, as the equipment includes a special swing designed with them in mind.

A playground modelled on the Hrastnik mansion
Next to the bespoke playground, inspired by Hrastnik’s Villa de Seppi mansion , a wooden train featuring didactic games evokes memories of the train that first travelled past Hrastnik in 1849. “The new playground is meant for children to play in and develop their motor and social skills in the process. But what we are most proud of is the fact that the playground includes the first certified swing for mobility-impaired children in town, which will enable them more opportunities to play and integrate into society,“ Mayor of the Municipality of Hrastnik Marko Funkl said as the playground officially opened.

Triglav’s mascot teaching children about safety
With Zavarovalnica Triglav’s help, the Municipality of Hrastnik set up the playground following the guidelines of environmentally friendly construction and used a combination of black locust wood and polyethylene, both of which are fully recyclable. “For a decade now, the Children of Triglav campaign has been renovating and opening new playgrounds where families, children, adolescents and those young at heart can playfully spend quality free time,” Mojca Brečko, director of Zavarovalnica Triglav’s regional unit in Trbovlje, explained the purpose of the campaign. The children were particularly excited to see that she was accompanied by the well-known mascot, a yellow dog called Willy Watchdog (Kuža Pazi), who used the opportunity to raise the children’s awareness about playground and road safety. 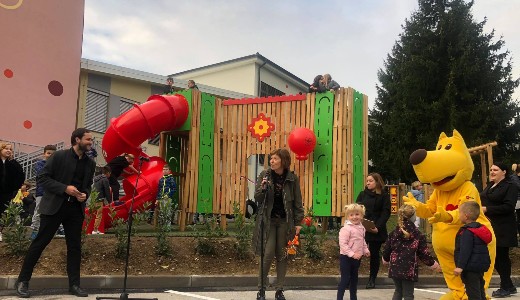