More than 2,500 children from all over Slovenia cheered on the world’s top biathletes at Rudno Polje

More than 2,500 schoolchildren from all over Slovenia cheered on the world’s best biathletes as they competed for World Cup points in the women’s sprint event in Pokljuka today. In cooperation with the Pokljuka Organising Committee, and as part of the Children of Triglav campaign, Zavarovalnica Triglav gave the children an unforgettable experience in Pokljuka, in the company of sports stars, for the ninth year in a row. “Children are the best fans,” says Slovenia’s best biathlete, Jakov Fak.

The first day of competition at this year’s Biathlon World Cup competition in Pokljuka was attended by pupils from 54 schools, who watched the sprint competition for female biathletes as part of the Children of Triglav campaign. They once again cemented their reputation as some of the sport’s biggest fans with original fan banners and valuable encouragement to the elite biathletes at Rudno Polje. Their support is also appreciated by our top biathlete, Jakov Fak: "I am very happy to see so many children watching the biathlon competition this year as part of the Children of Triglav campaign. With respect to everyone, I can say that children are the best fans. I also think it is good for as many of them as possible to get to know this wonderful sport. I’m delighted that they created such a great atmosphere today.”

Young fans warmed up before the competition with a hike to Javorška Planina and the rhythms of the pop group BQL. Today in Pokljuka will always be etched in the children’s memories, and especially the time spent with the country’s best biathletes.

Sustainable fan campaign
This year’s Children of Triglav campaign in Pokljuka had sustainability at its very core, since half of the participating schools were “eco-schools”. Young people already began thinking about the sustainable development goals in the run-up to the competition, and designed their fan banners with this in mind. The traditional competition for the best fan banner was won by pupils from the Notranjski Odred Cerknica, Leskovec pri Krškem and Dr Ivan Korošec Borovnica primary schools. The prizes were awarded by members of the Slovenian men’s biathlon team and by Tjaša Kolenc Filipčič, director of marketing communications at Zavarovalnica Triglav.

The best fan dance was organised by students from France Prešeren Kranj grammar school, with the Take Care of our Environment competition featuring for the first time this year. With their piece on the topic of climate change causing visible changes to the environment, pupils from Tolmin primary school were judged to have been the most creative.
"With the Children of Triglav campaign at Pokljuka, we aim to promote a healthy and active lifestyle for children and give them an unforgettable winter’s day in the middle of an area of unspoilt nature. This year, we have paid particular attention to sustainable development goals. We want to promote an awareness that nature and our future are everyone's responsibility – even among the youngest children, to whom the future ultimately belongs. We are pleased that they have shown such a considerable amount of creativity,” said Tjaša Kolenc Filipčič, director of marketing communications at Zavarovalnica Triglav.

Slovenian biathletes can also send an important message to children, as they are ambassadors of UN Sustainable Goal 10– reducing inequalities. Biathlon is one of the few sports that has managed to very quickly equalise the women’s and men’s events in terms of quotas, disciplines, venues and mixed relays, as well as in terms of prize money. You can find out more in this video, which was produced by the Securing the Future project.

For more quality leisure time for children
The Children of Triglav campaign was set up to promote healthy and active lifestyles for children and families. For more than four decades, Triglav has been providing children from all over Slovenia with the opportunity to watch ski-jumping competitions in Planica and, since 2013, around 20,000 children have been able to watch biathlon competitions in Pokljuka with Triglav’s help. Slovenia’s largest insurer also promotes quality leisure time for children by renovating and installing playgrounds throughout Slovenia. 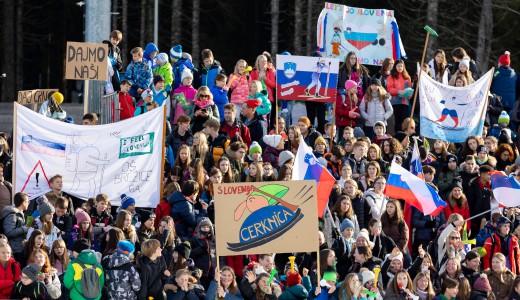