Children of Triglav in Mežica climbing the new playground equipment

With modern playground equipment, children can play safely and, at the same time, develop motor skills and strengthen their physical and mental health. Zavarovalnica Triglav, together with the Mežica Municipality, has helped set up a new children’s playground as part of its social responsibility campaign ‘Children of Triglav’.

Playgrounds are places where children have a chance to play, have fun, and develop motor and social skills. With the aim of making playgrounds and playground equipment safe, Zavarovalnica Triglav’s ‘Children of Triglav’ campaign has, for 11 years now, been bringing joy to children and their parents by opening and renovating children’s playgrounds across Slovenia, ensuring carefree and safe outdoor play.

New climbing playground equipment for children
Zavarovalnica Triglav’s funds helped set up a new multi-purpose playground nestled among the blocks of flats in Mežica. “By setting up this multi-purpose playground, we’ve helped children in developing their motor skills, which are extremely important for their physical and mental progress. We are glad that we managed to bring another positive change in our local environment together with Zavarovalnica Triglav,” Mežica’s mayor Dušan Krebel commented on this new addition, which has delighted everyone.

Willy Watchdog joined the fun
The opening of the refurbished playground was also attended by Triglav’s well-known mascot, a yellow dog called Willy Watchdog, who, as always, was on hand to raise awareness about playground and road safety. “Through our ‘Children of Triglav’ campaign,we have been working for 11 years now on renovating existing or establishing new environments where families, children, young people and the young at heart can enjoy high-quality free time and have fun. Encouraging people to spend their free time outdoors and in a healthy way is part of our insurance company’s commitment to sustainability,” Tonja Vinkl Vončina, Director of the Slovenj Gradec Regional Office of Zavarovalnica Triglav, elaborated on the purpose of the campaign.

Children of Triglav and sustainable development
Zavarovalnica Triglav has been leaving its mark on local communities for decades through its social responsibility campaigns. The ‘Children of Triglav’ campaign is part of the company’s sustainability efforts, with the development and safe future of children at the forefront. Slovenia’s largest insurer has so far helped to set up and refurbish over 50 children’s playgrounds as part of the campaign. 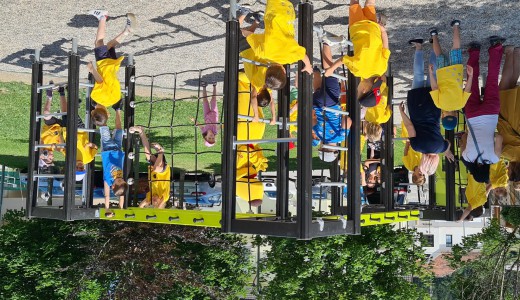