Don’t let the risk of injury keep you from running

We contacted a kinesiologist to help us dispel myths about running and learn about exercises that reduce the possibility of injuries.

Do you enjoy running but have been discouraged from actually practicing the sport due to the many myths surrounding it? At an event held at the Triglav Lab digital centre, kinesiologist Uroš Kožar and biathlete Jakov Fak shed light on some of the most common misconceptions and truths about running, which is one of the simplest athletic activities we know of. “If you approach it incorrectly, you can damage your health. But the positive impacts of running definitely outweigh the negative ones,” Kožar pointed out and demonstrated exercises that can reduce the possibility of running injuries.

Running is a frequent recreation of choice precisely because it is one of the simplest sports activities. You can put on your running shoes anytime and anywhere, choose a path and take off, alone or in company. Over time, various running myths emerged, discouraging some people from taking up this sport. The kinesiologist and running coach Uroš Kožar and biathlete Jakov Fak, who is also an avid runner, discussed some of the most common myths.

A gradual approach is essential
Is it true that running is bad for the knees? “It can be. Especially for runners who try to beat physiological processes and disregard the general principles of healthy physical activity. If you’re not taking a gradual approach, then running is definitely bad for your knees. This means it’s bad just because of the way you take it up. Running and physical activity as such make sure that the knees adapt, regularly regenerate and are generally in better health,” Kožar explained.

Sore muscles? Don't worry!
It’s a muscle pain that usually develops within 24 to 48 hours after physical activity. Basically, these are micro-tears within the muscle fibres. According to Kožar, however, this is not irreparable damage. Once the soreness passes, the muscle is even stronger and more resilient. Stretching alone will not prevent sore muscles; in fact, over-stretching can make things even worse. Mild stretching after running won’t hurt, naturally, he added.

Does asphalt hurt knees?
Kožar went on to dispel the assertion that running on asphalt surfaces is harmful. He says there is no miracle surface that would somehow “absorb our force upon impact with the ground, causing no strain on our body and joints.” Everything depends on whether we take up running the right way, using an appropriate technique. “It is true, however, that artificial surfaces such as asphalt are problematic because our movement on them is monotonous. The length of one’s step is always the same and the same body structures are burdened. Running on a forest trail, on the other hand, is much more dynamic,” he explained.

Kožar also demonstrated exercises that can significantly reduce the possibility of running injuries. Runners can do them anywhere, even in the woods. You can learn about how to do them correctly by clicking this link.

At the event held at Triglav lab, elite athlete Jakov Fak shared why he likes running. Every opportunity to move outdoors is a feast for this top biathlete’s body and soul. “I love running on uneven surfaces the most because it gives me a greater challenge,” he explained and recommended that runners should do exercises and start gradually.

You can follow the training sessions and pick up useful tips leading up to the Triglav Run via the event website and on social media, on the Instagram profile @triglavtek.si and Zavarovalnica Triglav’s Facebook page. 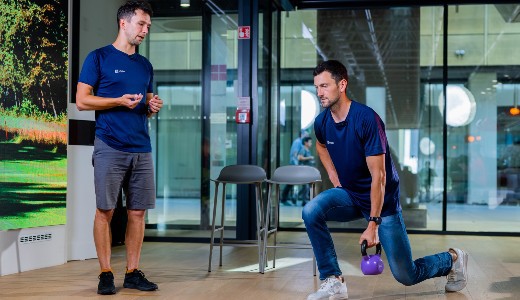