More than 1,500 runners and visitors at the special anniversary 10th Triglav Run on Saturday, 10 September 2022 contributed to an unforgettable sports and recreation event at Brdo pri Kranju. With the support of top athletes, runners of all generations tested themselves in six running challenges: the children’s Kuža Pazi (the Triglav watchdog) race, family race, trio relay race, half marathon and 10 and 5 km races. Once again this year the runners took to the trails around the government protocol park at Brdo for a good cause – better neonatal care – while the event’s sustainability orientation also featured prominently.

Runners cheered on by 17 top athletes
The Triglav run towards a healthy and active lifestyle encourages all generations, so every year the event is supported by numerous top Slovenian sports figures. “The Triglav Run is an opportunity for good training, and the course is pleasant and not demanding. At the same time, as an athlete my participation shows gratitude to Zavarovalnica Triglav, which supports parasports. The event is also a chance to get photographed with one or another admired sports figure; last year I crossed the finish line together with ski jumper Peter Prevc. Since I knew that another nice event awaited us, I took part once again in the Triglav Run,” said blind Slovenian runner Robi Kogovšek, who was at the event and is also an ambassador of the Triglav Run.

Alongside him, along the course and by the finish lines the runners were cheered on by other top sports figures, including ski jumpers Cene Prevc, Nika Križnar and Urša Bogataj, biathletes Anamarija Lampič, Jakov Fak and Klemen Bauer, snowboarders Žan Košir and Rok Marguč and cross-country skiers Vesna Fabjan, Eva Urevc, Neža Žerjav and Miha Ličef.

Focused on sustainability and charity
The Triglav Run is more than just a competition and a time trial to the finish line. “It’s an event that combines a love of sport and nature, it links together all generations, and promotes perseverance, charity and a healthy and active lifestyle. We showed that again this year, as we joined with lots of runners and other visitors to create an unforgettable event surrounded by nature. In the desire to care for nature and protect our future, this year we devoted special attention to sustainability. The Triglav Run also contributes towards the realisation of some of the objectives of the Let’s Secure the Future project, and thus constitutes a part of Zavarovalnica Triglav’s sustainable operations,” said Tadej Čoroli, member of the Zavarovalnica Triglav board, at the event.

The organisers of the Triglav Run once again made every effort to ensure that the natural setting of the Brdo government protocol park was left spotless. Runners were served locally produced food at the event, and the coupons used to obtain the food were made of paper and contained seeds, so the paper could also be planted. This year participants received promotional material for the most part in digital form. The sustainability dimension was enhanced by the call ‘Pazi to! Huda izkušnja’ (Check this out! Amazing work experience), through which two students participated as sustainable development coordinators at the sports and social event.

Apart from encouraging people to be active, the event is also traditionally dedicated to some of the most vulnerable members of our society. This year again Zavarovalnica Triglav made a donation to hospitals. The Director of Market Communication at Zavarovalnica Triglav, Tjaša Kolenc Filipčič, presented a voucher for 15,000 euros to the ‘Slojenčki’ Society, which will allocate the funds for the purchase of oximeters and incubators for the needs of Slovenian maternity hospitals.

10 numbers of the 10th Triglav Run 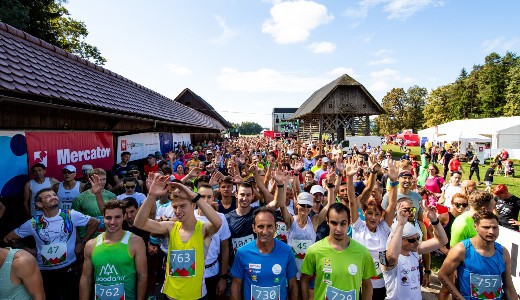