120 years of Zavarovalnica Triglav, d.d., and 90 years of Plečnik’s masterpiece

On 5/7/2020, Zavarovalnica Triglav, d.d., celebrates its 120th anniversary. For the last 90 years, the company has been based in the building at Miklošičeva 19 in Ljubljana, which is the work of renowned architect Jože Plečnik.

Experts have described this landmark as a model of a business, residential and commercial building, and as a tribute to Slovenia’s natural resources, its ingenuity and industry. This monumental corner palace, distinguished by its uncommon shape and a lavish double façade, is one of Plečnik’s most important works, and as such a cultural monument of national significance.

Vzajemna zavarovalnica, the predecessor of Zavarovalnica Triglav, d.d., was established in 1900 and did not have its own premises during the first three decades of business. From its establishment to its relocation to a new building in 1930, it rented offices in the Medijat’s House on today’s Slovenska cesta in Ljubljana. After two decades of this, the company decided to build its own office building.

In the turbulent 1920s, when Europe was still recovering from the First World War, Vzajemna zavarovalnica was doing good business. Favourable conditions, as well as the government’s decree that large companies must build apartments for their employees, convinced the company’s management that they needed their own building. In 1927, the company bought the lot on which it is now located, and in 1930 it relocated to the newly built Vzajemna zavarovalnica palace at the intersection of Miklošičeva and Masarykova streets, today Trg OF.

The project was entrusted to Jože Plečnik

The design and construction of the building were entrusted to the Slovene architect Jože Plečnik, who was much admired abroad but yet to gain recognition in Ljubljana. However, the construction of the Vzajemna zavarovalnica’s splendid and monumental palace was initially less than promising. At that time, Plečnik frequently moved between Ljubljana and Prague, where he was the chief architect of the renovation of Prague Castle in Hradčany.

At the beginning of the construction work, the acclaimed architect left most of the work to his student France Tomažič, who later built Tomažič’s building. But since Plečnik was uncompromising in his projects, he rejected the plans drawn by Tomažič and drew new ones. He decided that the new Vzajemna zavarovalnica building should become a model of a business, residential and commercial building. It was also the first representative business building Plečnik designed.

In designing the Vzajemna zavarovalnica palace, Plečnik drew on his Zacherlhaus in Vienna, which he considered to be his best work. He encountered an interesting problem: the intersection of Miklošičeva and then Masarykova streets (today Trg OF) was not rectangular, but at a fairly sharp angle (approximately 74 degrees). To overcome this, Plečnik designed the corner part of the building with the main entrance in the shape of a wedge, while the entrance hall is round. Since the building stands opposite Ljubljana’s main traffic hub, the bus and train stations, Plečnik oriented the building’s entrance towards them. The insurance company’s customers arriving at both stations thus immediately noticed the entrance to the building.

The design of the building’s interior also required ingenuity. Because of the sharp angle of the intersecting streets, the main interior staircase, adorned with marble pillars, is trapezoidal in shape.

As noted above, the building is distinguished by its uncommon shape and a lavish double façade. The façade is divided into a ground floor with a mezzanine, which was intended to house catering establishments and the caretaker’s apartment. While the ground floor and mezzanine façade is subdued and smooth, the upper part, covered in brick, is more varied. This part was intended for the company’s offices, as well as for prestigious apartments on the top floor of the building.

The façade is topped with a frieze of figures clad in classical garments from antiquity, with long ribbons symbolising reciprocity, and above them a frieze with children, depicting intergenerational solidarity.

While the outer façade is luxurious, the inner façade is no less interesting with its long row of balconies, that is, external corridors. Built between them is a horseshoe-shaped tower with a staircase that cannot be seen from the courtyard.

The building as a tribute to Slovenia and its people

At the opening of the building in 1930, France Tomažič, Plečnik’s student who supervised the construction, said that it was built entirely by Slovene ingenuity and the hands of its people: “The building is a monument to Slovenia’s natural resources, Slovene ingenuity and industry.” Indeed, only the best craftsmen were involved in the work, and local materials such as bricks from Vrhnika and Karst stone were used, which meant that the construction was completed very quickly.

The building in which the insurance company is still based today is actually two buildings that were built five years apart. The first is the so-called Plečnik’s building, which was completed in 1930, while the second, the so-called Tomažič’s building, was completed in 1936. While the two buildings appear very different from the outside, they can be barely distinguished from the inside, with only a thin line in the plaster indicating the transition between the two.

One of the most modern buildings of its time

Tomažič’s building has six floors. Along with the street-facing building, a three-storey semi-circular building was erected in the yard. The new building was completed in 1936 and was considered very modern and technologically advanced. The elevator, which is still in place today, was already installed then. In addition to the elevator, the new building featured a telephone exchange, a vault, an alarm system and a modern boiler room. The floor plan and functional layout follow Plečnik’s building – the ground floor was intended to be rented out to various establishments, the mezzanine housed business offices, and the upper floors rented apartments.

Still the home of the largest Slovenian insurance company

Plečnik’s palace is still home to Zavarovalnica Triglav, d.d., the legal successor to Vzajemna zavarovalnica. The latter was founded on Sunday, 5 July 1900, at the initiative of Dr Janez E. Krek. Thus were built the foundations of the Slovenian insurance industry 120 years ago, flourishing and then spreading beyond Slovenia’s border following its independence.

The Triglav Group, whose parent company is Zavarovalnica Triglav, d.d., is today the leading insurance-financial group in Slovenia and the Adriatic region, and one of the leading such groups in South-Eastern Europe. Through partnerships with brokerage and representation companies and reinsurance companies, the Group operates in a wide international environment. 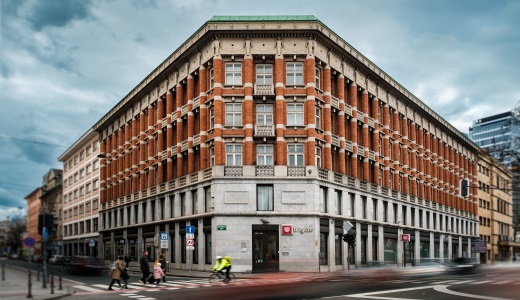 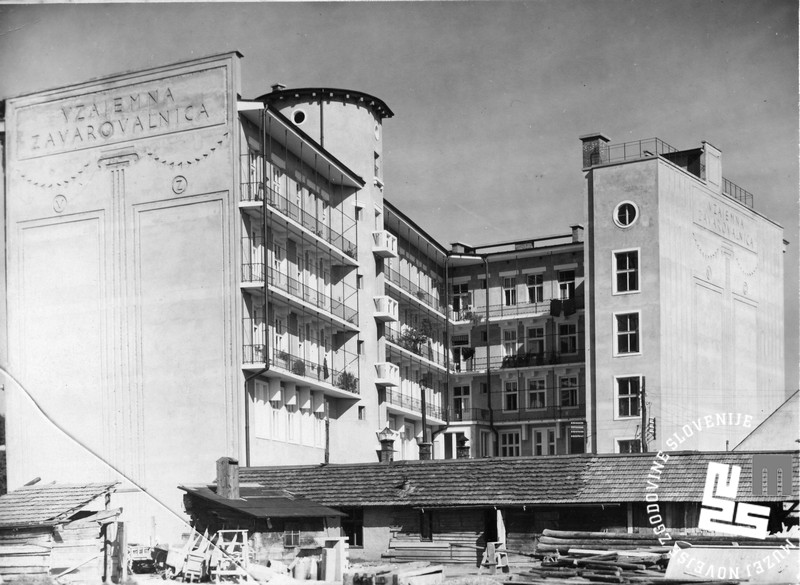 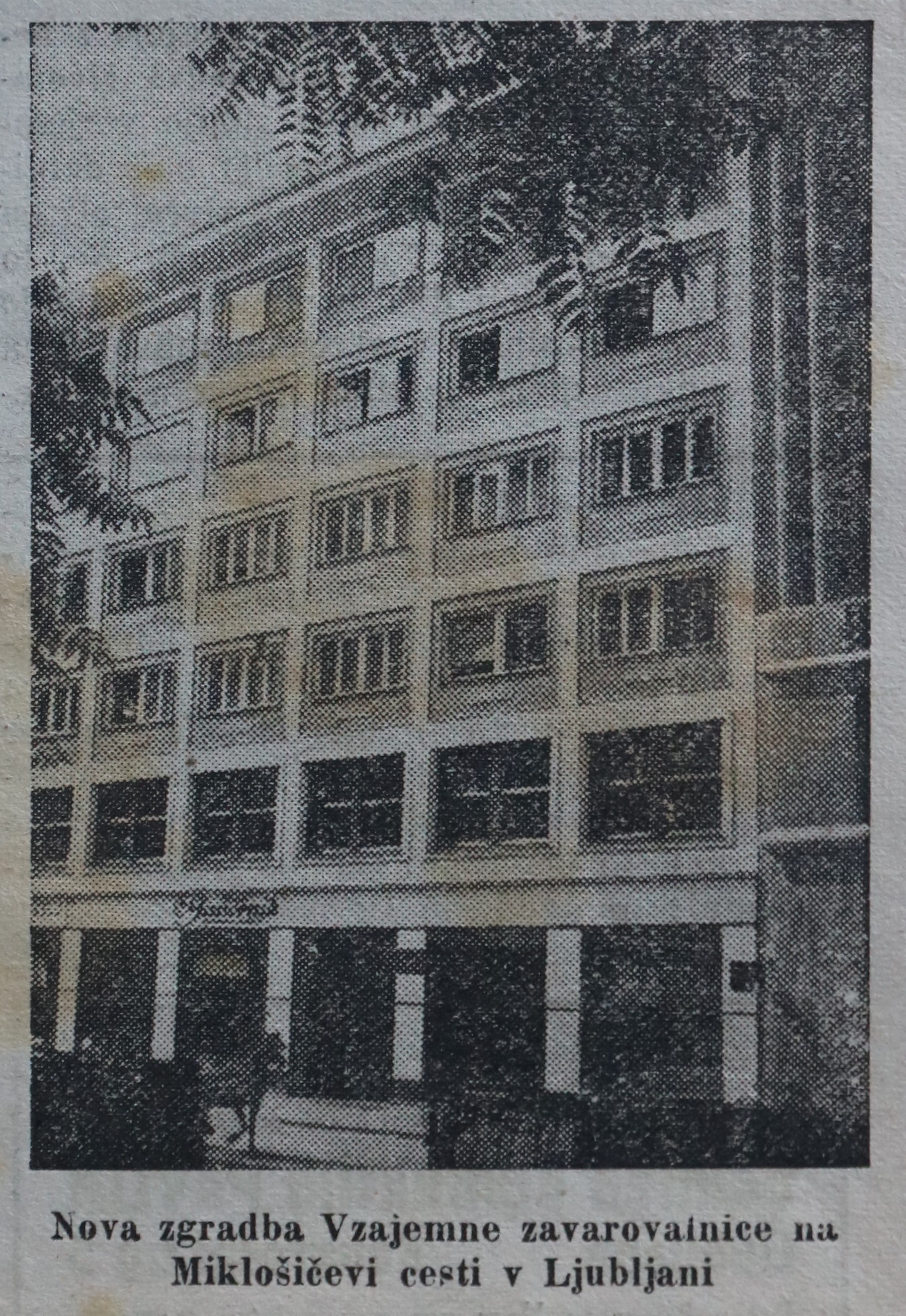