Despite many traffic safety improvements, pedestrians remain the most vulnerable road users. Particularly vulnerable in this regard are children, who face the greatest danger precisely when crossing roads. Zavarovalnica Triglav therefore helped set up COPS@zebra in the centre of Trebnje, an innovative warning system enabling pedestrians to cross the road safely while also helping drivers. Dolenjska can now also boast a new “Your Speed” display in Žužemberk.

Last year’s statistics show that seven pedestrians lost their lives, with most tragedies occurring as they were crossing the road. In 2020, a total of 39 people lost their lives on the roads, not only pedestrians but also drivers, motorcyclists and cyclists, accounting for 49% of all deaths. According to figures from the police, the majority of fatalities in road accidents caused by careless drivers at crossings are pedestrians. However, the fact that pedestrians themselves are often responsible for fatal road accidents is also worrying. This happens most often when they cross roads outside of crossings. According to experts, the distraction caused by smartphones and other devices is one of the main causes of road accidents.

A warning system for both pedestrians and drivers
These troubling trends prompted the development of an innovative COPS@zebra system, the result of knowledge within a Slovenian company called Cops Systems, which is now installed on the traffic-heavy Gubčeva cesta in Trebnje, on the pedestrian crossing next to the Šeligo restaurant. Since the crossing is located in a spot where visibility is far from ideal due to the shape of the road and nearby buildings, the area can be quite dangerous.

The newly set-up system, co-funded by Slovenia’s largest insurance company, operates in a simple way by warning pedestrians of oncoming vehicles and their speed. At the same time it alerts drivers to the presence of pedestrians who are crossing the road or are about to do so. “Together with our project partners, we launched a trial run of the system in Maribor, the capital of Štajerska, last year, where we also conducted a study on its effectiveness. Most of the pedestrians who participated in the study confirmed that the COPS@zebra system makes them feel safer when crossing the road, which is why we are hoping for similar positive effects in Dolenjska as well,” explained Ana Cergolj Kebler, head of road safety projects at Zavarovalnica Triglav.

Traffic calming in a dangerous section in Suha Krajina
For several years now, Slovenia’s largest insurer Zavarovalnica Triglav has been organising various activities to improve Slovenian road safety statistics. In order to increase safety on road sections that are dangerous and where visibility is poor, 81 speed indicator displays and 24 COPS@ROAD anti-collision systems, along with the same number of COPS@RAIL systems for alerting drivers of oncoming trains, have been installed in Slovenia. This year, 11 innovative COPS@zebra systems will also be set up to warn pedestrians of oncoming vehicles and their speed. By the end of autumn this year, a total of 116 different systems for greater traffic safety will have been installed in Slovenia, of which 15 will now ensure greater safety in Dolenjska and Bela Krajina.

A new “Your Speed” display has been set up on a dangerous section of the regional road through Žužemberk on Baragova cesta (the Žužemberk–Pljuska section), which is the route to the local primary school and where the speed limit is 50 km/h. The area has no pavement and has seen as many as five traffic accidents in recent years, one of them sadly resulting in severe physical injuries. One week after the display had been set up, the share of speeding drivers fell to 22%, which made the road safer for children and other users. 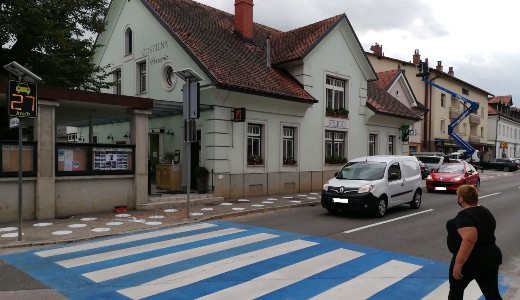 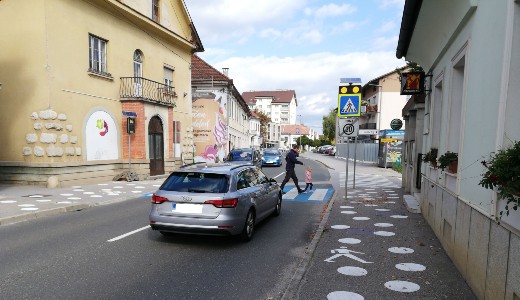 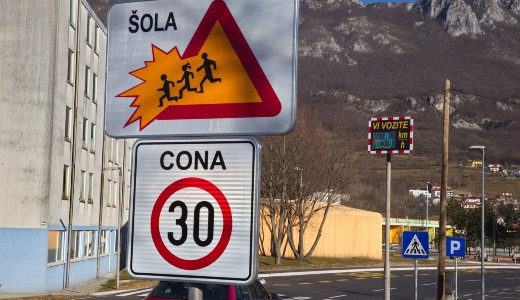