New acquisitions for a safer tomorrow of the elderly and firefighters

With the ‘For a Better Tomorrow’ New Year’s campaign, Zavarovalnica Triglav is fulfilling its mission of creating a safer future by allocating a portion of its funds at the end of the year to support various prevention projects nationwide, as has become the company’s tradition. The support of Slovenia's largest insurance company was also welcomed at the Idila Retirement Home, where they will be able to take care of the health and well-being of more than 160 residents with the help of new medical recliners, and the Jarenina Voluntary Fire Brigade will be able to intervene even more effectively with new protective equipment.

The safety of different generations is again the main theme of the New Year's ‘For a Better Tomorrow’ campaign in the Štajerska region. “Zavarovalnica Triglav’s mission is to create a safer future. In this New Year's campaign, we are paying special attention to firefighters and the elderly, striving to ensure a better and safer tomorrow for them through our prevention activities," Uroš Skuhala, Director of Triglav’s Maribor Regional Office said about the purpose of this year's campaign.

The new medical recliners, which are designed for the rehabilitation of the elderly, will improve the care of the Idila Retirement Home residents. "By using the medical recliners, we are taking care of the health and well-being of our residents, and saving the nursing staff from long-lasting rehabilitation and wound care through preventive actions, thus also taking preventive care of the health of our employees and providing them with a healthy and safe working environment," explained Alica Rendulić, Director of the Idila Retirement Home.

Pesnica firefighters with new protective equipment
New equipment – protective firefighting boots – was also welcomed by members of the Jarenina Voluntary Firefighting Association, which takes care of fire safety in and around the Municipality of Pesnica, which covers 78 square kilometres and has a population of just under eight thousand inhabitants. “The firefighting boots are specially designed for field operations, both for firefighting and other interventions. They offer adequate protection in all seasons and are particularly resistant to all body fluids, preventing the penetration of viruses and bacteria. The use of quality firefighting boots prevents injuries and protects the health of firefighters on interventions," the practicality of the new protective equipment was described by Danijel Kolerič, President of the Jarenina Voluntary Fire Brigade, which boasts a long tradition of firefighting, as the local association has been successfully operating for more than seven decades.

For a Better Tomorrow – nine years and more than 230 projects
The New Year's ‘For a Better Tomorrow’ prevention campaign, organised by Triglav, has been running for the ninth year in a row. In recent years, Zavarovalnica Triglav has supported more than 230 prevention projects across Slovenia through this campaign, 26 of which this year. In recent years, the company has co-financed the purchase of defibrillators, ultrasound and ECG machines, and other life-saving medical devices, supported a large number of other projects in the fields of healthcare, civil protection, flood mitigation and road safety, and helped numerous fire brigades around the country. 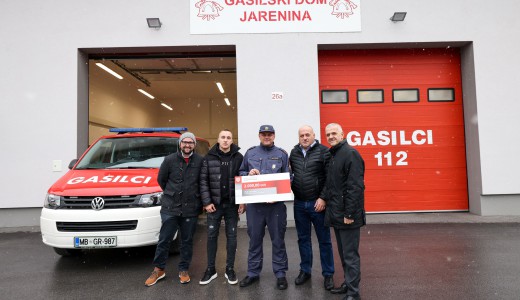